If you mistake Portmarnock Hotel and Golf Links for its well-known neighbor, Portmarnock Golf Club, it would be perhaps the nicest praise you could give the establishment, which is nestled between the charming coastal villages of Howth and Malahide. Both courses are located on the terrain that connects Portmarnock to the spectacular Velvet Strand, which is five miles long. While the 27-hole Portmarnock Golf Club was established in 1894, its more recent neighbor did not begin play until 1995. 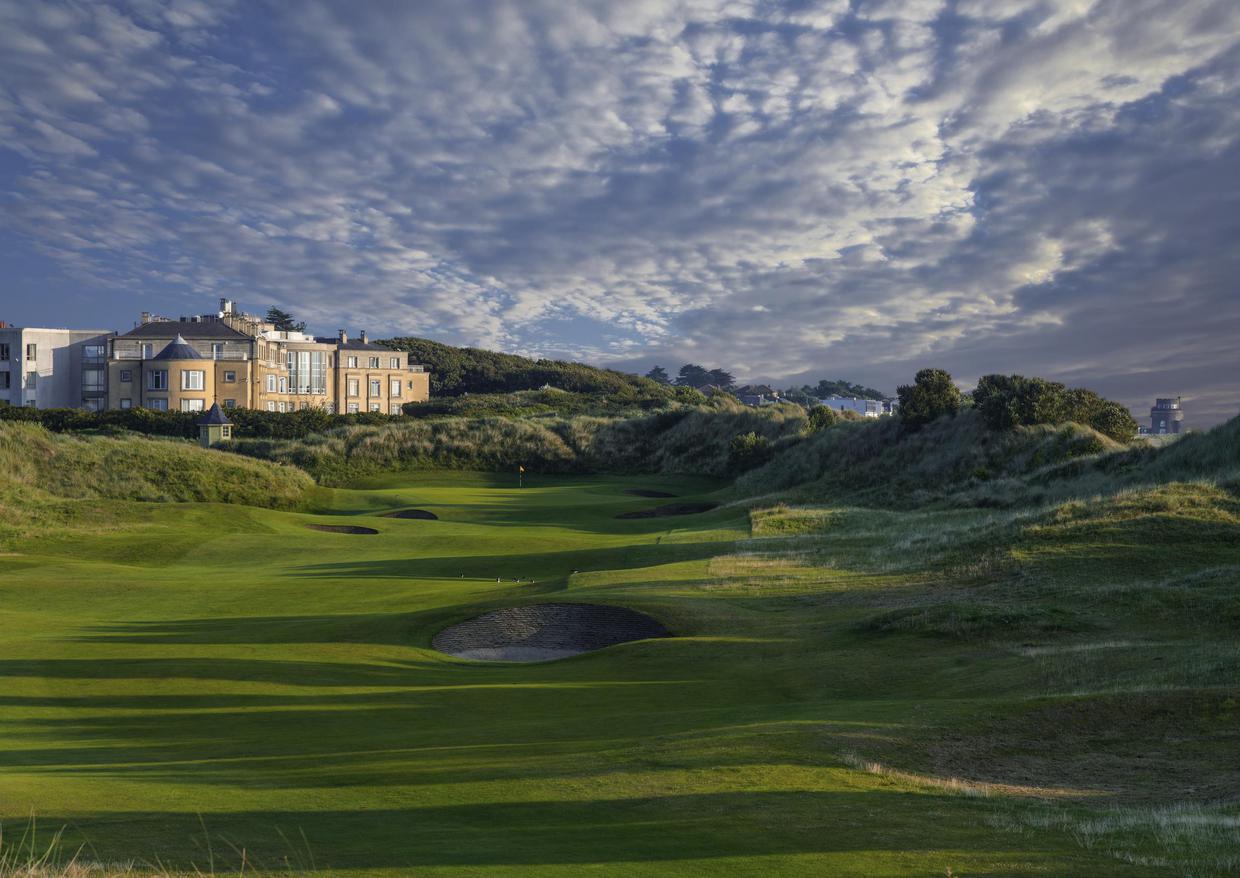 The links course is located on the former Jameson Estate in St. Marnock’s, and in 1858, John Jameson, who later served as president of Portmarnock Golf Club, created a 12-hole private course that extended from his home, which is now the hotel, as far as one of golf’s most famous par-3 holes, the 15th hole at Portmarnock Golf Club, which hugs the shoreline.

If one were to compliment Portmarnock Hotel & Golf Links, they would say that it is an honest and fair test of golf that seems to have been around for a lot longer than it has. Additionally, it is playable year-round with no restrictions during the winter, and links superintendent Fintan Brennan has created some of the best putting surfaces in the country.

in the nation.
The 134-room hotel is located on the 160-acre beachfront property, which also features an 18-hole championship golf course that was one of Bernhard Langer’s earliest creations. He had to work with both coastal dunes and a sizable flat grassland that had once been used for cow grazing.

The front nine, which Langer and Stan Eby constructed together, is mostly located on the flatter side of the property. Stan Eby was extensively involved in the building of the Montgomerie at Carton House.

The first hole, a 375-yard par four, requires a precise iron approach to a green that is fronted by two sizable bunkers after a well-placed tee shot from an elevated tee box. In addition, the holes from the second to the sixth are on flat, quick terrain and have two par-5s that offer opportunities for birdies. One of the toughest holes on the course is the seventh, which calls for a crisp approach shot over a water hazard to a gorgeously framed green.

The final hole on the outer half, the 170-yard par-3 ninth, offers the first glimpses of the ocean. The eighth is a quirky dogleg par-4 that also requires two well-struck shots to an undulating putting surface placed dramatically among the dunes.

and the coastline of Dublin.

Most notably, the par-three 11th hole, which is punishing to any shot not exquisitely played, the first two holes along the shore on the back nine make superb use of the rolling terrain.
The course’s longest and toughest hole is the 12th, a 462-yard, par-four. A two-putt is anything from a formality on this hole, which necessitates a precise drive to the left part of the fairway and a challenging long-iron or wood approach. Before three concluding holes that could legitimately stake claim to Ireland’s most difficult finishing stretch, the 13th, 14th, and 15th provide a welcome reprieve.

To avoid giving up a shot to the course, the 420-yard 16th requires a solid drive over a challenging carry to a tight landing area, followed by an accurate approach to another well-framed green. The 210-yard, par-3 17th hole typically plays into the wind, and any approach shots that are not perfectly judged are eagerly gathered by a sizable bunker in front of the green.

During the long-running and wildly popular Taylor Made Winter Series, Ireland’s best professionals and elite amateurs face a significant challenge on the 450-yard 18th hole with the beach on the right, taxing rough, and more strategically placed bunkers on the left.

The average number of players in the 23-week long Series is 86 every week. This course also hosted the inaugural Challenge Tour competition on the island of Ireland last year, which was won by Daan Huizing of the Netherlands.

The Sandman Hotel Group, a significant Canadian hotel chain, purchased the Portmarnock Hotel and Golf Links in Dublin in 2019 for an undisclosed sum.

According to Mitch Gaglardi, Managing Director of Northland Properties’ UK division, which is owned by Sandman Hotel Group, “We are pleased to enter into Ireland.” “This property is really unique, and this region of the world is great. With our own 50+ years of experience paired with the hotel’s long history, we have the utmost regard for the current team.

of knowledge, we discover a successful formula.

The hotel had a significant €11 million restoration that included work on its guest rooms, spas, golf facilities, conferencing, and banqueting areas. It is now a warm golfing retreat that is only a short drive from Dublin’s city center.

Prior to leading the team at Portmarnock, Paul McCanny was head PGA professional and golf manager at Killeen Castle for the 2011 Solheim Cup. He was appointed director of golf last year. In addition, while serving as a Provincial Coach at Leinster Golf, he assisted in the mentoring and assistance of the upcoming generation of golfers.

When he accepted his first position at Black Bush Golf Club, his love for the game blossomed into a career.

his interest into a profession.

Overall, Portmarnock Hotel and Golf Links richly merits its placement as the No. 21 golf course in the Republic of Ireland and the fourth-best golf course in Dublin.

The course will undoubtedly become even more of a competitor for any links course on this island after planned upgrades. In the end, having a driving range might also improve its chances of hosting the Irish Open in the future.